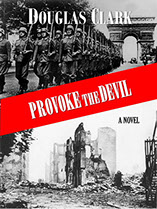 The time is a cauldron of social and political discord throughout the world brought together in a perfect storm of circumstances. The world-wide Great Depression cause desperate conditions for the world's working classes giving rise to popular movements that threatened old social orders and weak republican govern-. By the late 1930s Europe was again poised to explode into a great conflict.

American journalist and photographer Marc Fraser exposes a scandal of high-level corruption in Los Angeles that leads to a European assignment to cover the rising tensions brewing in Europe in the early 1930s. After covering Adolf Hitler's rise to power in Germany he covers the erupting civil war in Spain.

Reporting from the National revel side, Fraser is appalled by the murder, rape, and torture of civilians. Unwilling to bend to the military censors he embarks upon a dangerous attempt to inform the world by smuggling out condemning reports and photographs.

Spain becomes the reliminary round to WWII. When France is invaded by Nazi Germany in 1940, Fraser is trapped in his adopted home Paris, once again confronted with a brutal Fascist regime.