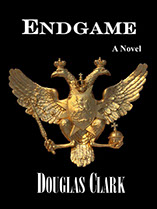 In Paris, Grigoryev is now seeking to defect to the United States. In exchange for asylum, he gives her ultra-secret electronic files. The information provides irrefutable evidence of the theft of Russian thermonuclear warheads now in the hands of Iran. Additional documents expose a vast international financial conspiracy by the Putin regime to launder Russian money in the West.

Prescott believes the current administration will confiscate and bury the Russian corruption material under the cloak of national security. Yet she must expose the missing nuclear warheads.

To satisfy both objectives, she turns to investigative journalist, Mark Reynolds who exposed Russian wrongdoing years earlier. They decide to release everything publicly to remove the government’s ability to control the information.